Part 1: I have in my hand a plain, ordinary LED

Let’s return to the first circuit we built:

You will need the following parts: 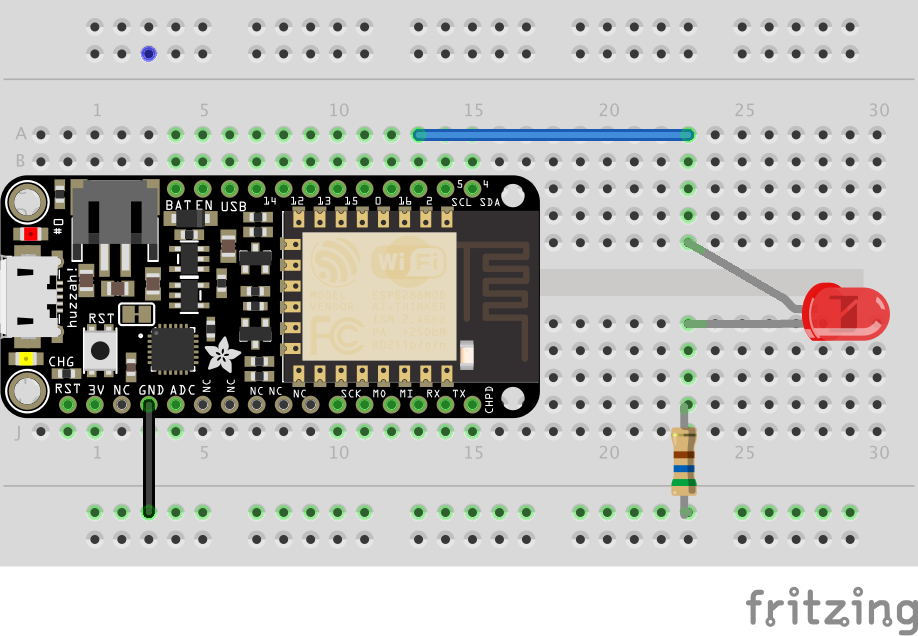 So far we learned how to turn the LED on; how to turn it off; how to blink the LED; and how to blink it in various patterns. In this experiment we are going to learn how to have different levels of brightness. Earlier in the class I said those digital pins can only be on or off and now I am saying the opposite. How can this be?

Here is the non-technical explanation. Suppose you are in a room and your little brother quickly turns the lights on and off. Faster and faster. At some point, if your brother is particularly quick, this stops being extremely annoying and instead we stop perceiving the on and off and instead sense a steady dim light. The ons and offs are there but we don’t perceive them. If the offs are a bit longer than the ons the light is dimmer and if the ons are a bit longer than the offs then the light will be brighter. This is called Pulse Width Normalization or PWM. It let’s use our digital on and off to make something that looks on the surface as non-digital. This is pretty cool!

Fortunately, we don’t need to write code that quickly turns the LED on and off. We tell our ESP8266 microprocessor how bright the LED should be, and it takes care of the details. Here is the scoop. Instead of using:

we are going to use

A sample program to have a mid-brightness LED light. (

Open up the Arduino IDE (the program you just installed in the step above). Then, under the file menu select New and type in the following program

Multi-LED bonuses for the remixes below

Can you write code so that the lights start dark, gradually increase in brightness and then gradually dim and then repeat?

Here is a puzzler that may help you with one of the above problems. What does the following code do?

If you understand this code, it should provide a clue how to. do the loopy pulsey thing.

Part 2 The Magical Mysterious World of the Multicolor LED 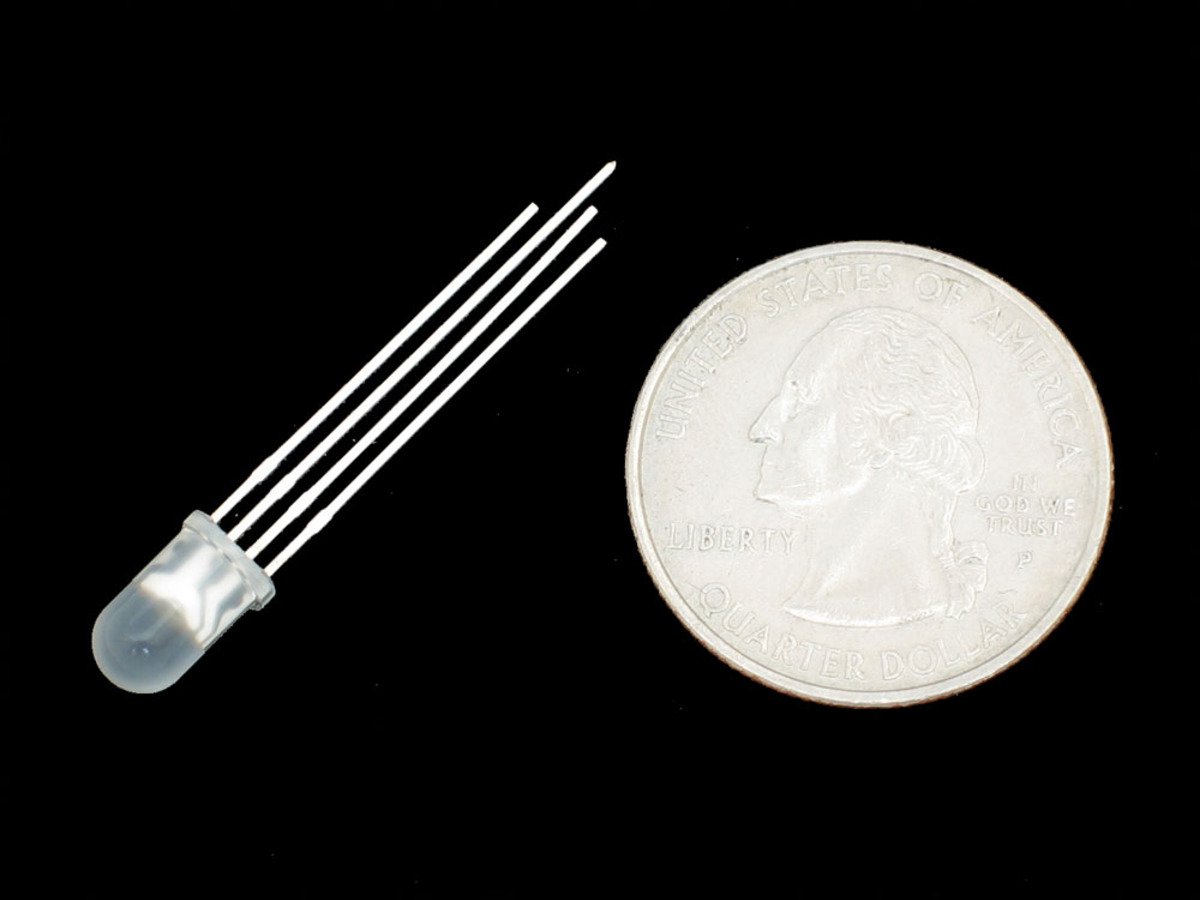 In this part of the lab we are going to be working with what is called an RGB LED (RGB stands for Red, Green, Blue). There are 4 wires sticking out of this LED. The one we have in our kit is called a Common-Anode type, which simply means that we connect the long leg to 3V. (The other type is the Common-Cathode type where we connect the long leg to ground) Here is a picture that may help: 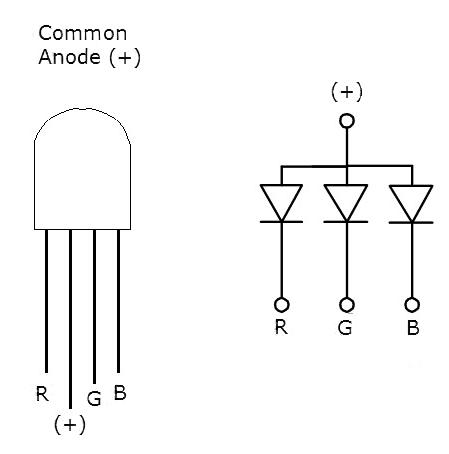 Let’s pause and look at that picture

Some slight challenges with a common-anode LED.

Having a common-anode RGB LED makes life a tad more interesting. In the above example if we wanted the led off we would write:

and if we wanted full brightness we had

With a common-anode LED things are topsy-turvy. To have a green led off we would have

and if we wanted full brightness we would have

We could also use digitalWrite. In this case

would be off and

In this single LED we can fiddle with the brightness of Red, Green, and Blue. For any color we would specify values for each of these. For example, if we wanted solid blue we might have:

Magenta (aka Fushia) is an equal mix of red and blue so if we wanted a bright magenta we might have:

If you wanted a dimmer magenta you could do:

Pink is mostly red with some green and blue:

Let’s get to work! 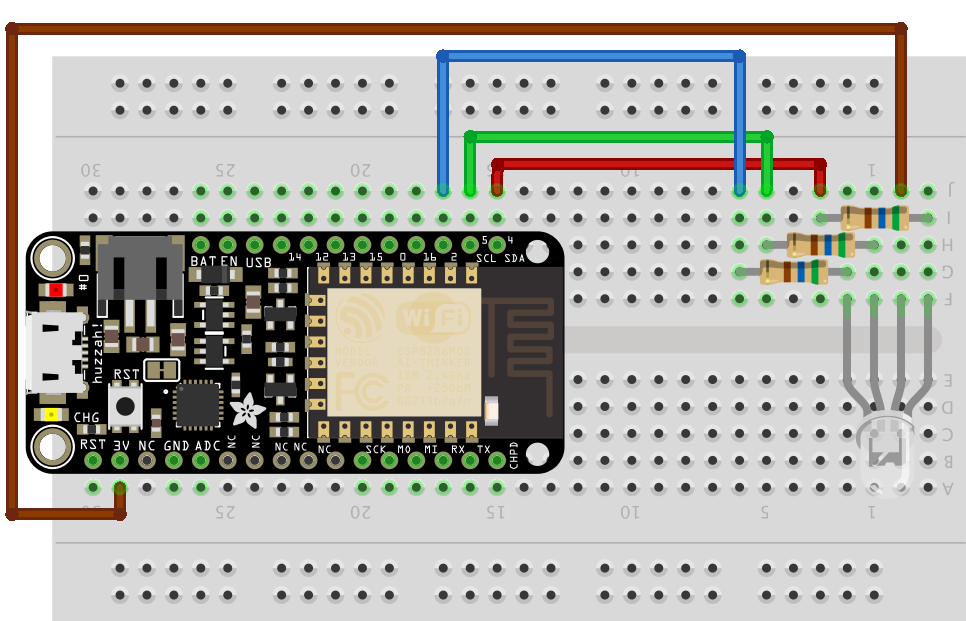 And here is code that will display 8 colors just using digitalWrite:

Here is some code that pulses the red part of the multicolor LED (and introduces the for loop):

As you can see, the red light starts at its brightness (value 0) and quickly dims (goes to 1023).

Let’s look at the code for the function dimmerRed.

Red and Blue Passing in the Night

Can you write a function redToBlue so that as the red dims the blue increases in brightness? The format of the function is similar to that for dimmerRed. Once you’ve written that function change the loop function to:

Now we want the multicolor led to go gradually from red to green then green to blue and then blue to red? Think about how you would break this problem down into simple functions. 10xp for a solution that works, 20xp for code that breaks this task down into simpler subtasks.

This is a puzzle. What do Mikaela and I want to see?

Controlling Color from Your Phone - 15xp

1: Tutorials are CC BY-SA 4.0. Original page at Sparkfun Inventor’s Kit for Photon. This slight remix by Ron Zacharski a