In this experiment we will be working with a potentiometer (aka a variable resistor): 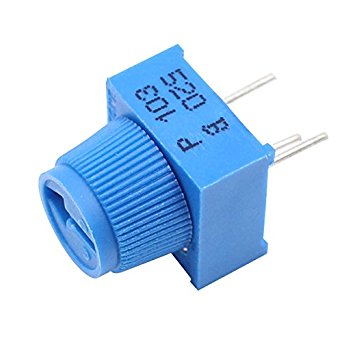 Beautiful, isn’t it? When connected to ground and 3V (V stands for volts)the middle pin outputs a voltage between 0V and 3V depending on the position of the knob on the potentiometer.

A potentiometer is a perfect demonstration of a variable voltage divider circuit. The voltage is divided proportionate to the resistance between the middle pin and the ground pin. In this circuit, you’ll learn how to use a potentiometer to control the brightness of an LED.

You will need the following parts:

Add the push button to the same LED circuit from the first experiment. Follow the Fritzing diagram below.

Copy and paste this code into the IDE. Then upload.

What You Should See

You should see the LED blink faster or slower in accordance with your potentiometer. If it isn’t working, make sure you have assembled the circuit correctly and verified and uploaded the code to your board, or see the troubleshooting section.

The variable named sensorValue is set to whatever the Huzzah reads from the pot. When that value is large, say 1024, the LED will blink slowly (on for 1 second and off for 1 second) and when the value is small it will blink rapidly– so rapid that it is imperceptible.

If you are thinking this sounds like a job for an if` statement, you would be correct. Maybe something like

Suppose I want the potentiometer to do 3 things. When it is in the lower third of its range the LED is off; when it is in the middle third the LED is blinking; and in the upper third it is steadily on. Can you modify the code to do this?

Bike Light Challenge - up to 50xp

Can you implement the device illustrated in this Video showing a Bike Light Initially, when the potentiometer is all the way to the left all lights are off. As you move it to the right, it changes to different modes.8xp for each mode (not counting all off) up to 5 modes. 10xp per mode if you use 5 LEDs.

1: This experiment is a remix of Sparkfun’s Reading a Potentiometer.